Expensive gaming desktop companies strive to create PCs with great features and components and gamer aesthetics. But in reality, most shoppers are simply looking for a decent-priced system. Enter the Acer Nitro 50 N50-620-UA91 Gaming Desktop. Our review unit hits the sweet spot in this regard. It houses a powerful set of components, is a modest-looking small tower, and costs. Ideally, it costs somewhere between an entry-level gaming desktop and a midrange gaming desktop.

Under the hood, it packs a peppy 11th Gen Intel Core i5-11400F 6-Core Processor and NVIDIA GeForce GTX 1650 graphics card which makes a good match for daily computing tasks and entry-level gaming. In short, it packs the right size and features, just enough to make serious gamers want to hang on to this PC for at least several years.

The Acer Nitro 50 N50-620-UA91’s design is similar to the Acer Predator Orion 3000. Don’t get me wrong, that’s a good thing. I would even dare to say its compact size is somewhat one of its best features. At 15.2 x 6.89 x 15.43 inches the Nitro 50’s chassis is slim and boxy but it is just enough room to pack a vicious amount of gaming power. Moreover, the trim footprint coupled with 16.57 pounds make for a decently portable PC great for totting around the house whenever necessary.

Like the Predator Orion 3000, the Nitro 50 flaunts an aggressive styling with red-and-black aesthetics. While this stereotypical “gamer” color scheme might not be everyone’s preference, we noted Acer did take it down a notch. There are notably fewer red accents on the case and design, which resembles the tamed-out Lenovo Legion Y520 Gaming Tower. The chassis is a blend of plastic and metal with plastic on the front panel and the sides, top and rear being a metallic casing (gives it a durable feeling). We love the metal construction as it adds a premium feel to the whole build – a nice touch.

Acer also steered away from gaming flourishes such as a tempered glass panel like one found on modern gaming rigs such as Skytech Blaze 3.0, iBuyPower, HP Omen Obelisk, and other OEM brands. Rather than that, they focused on the internal. The internal design isn’t flashy but it maximizes the use of space. On opening the side panel, the architecture isn’t particularly appealing but it’s devoid of messiness we’ve seen on most entry-level gaming rigs. Even so, you will have to unscrew a lot of parts for a simple upgrade which is common in small footprint PCs. This just goes to show, this PC is meant for the plug-and-play shopper.

Speaking of side panels, the left one gives access to the interior and it’s pretty easy to remove. You will need a screwdriver to remove the two screws. There’s a single drive bay for 2.5in and 3.5in hardware and a couple of spare memory slots, just in case you need to upgrade. I will be challenging to make future upgrades, but not impossible.

There are more than a few ports on this desktop. The front packs a single USB 3.2 Gen 2 Type-A and Type-C ports and two audio jacks. If you’re as old school as I am, you will also love the DVD burner at the front, just in case you still need it.
Meanwhile, the rear has a boatload including four USB 3.2 Gen 2 ports and two USB 2.0 ports, but only three audio jacks.
Additionally, for connectivity, Acer installed a dual-band Wi-Fi 6 (11ax) and Gigabit Ethernet, which is good.

The Nitro 50 might look small in size, but it’s every bit just as powerful as other larger mid-sized towers. It delivers plenty of power thanks to the 11th Generation Intel Core i5-11400F 6-Core Processor and N NVIDIA GeForce GTX 1650 graphics card combo.
The system easily handles casual use because the Core i5-11400F is powerful enough regardless of its companion components. That means users can enjoy day-to-day work with ease, which means web browsing and lightweight photo editing. It can handle workloads with multiple tabs open on the browser. 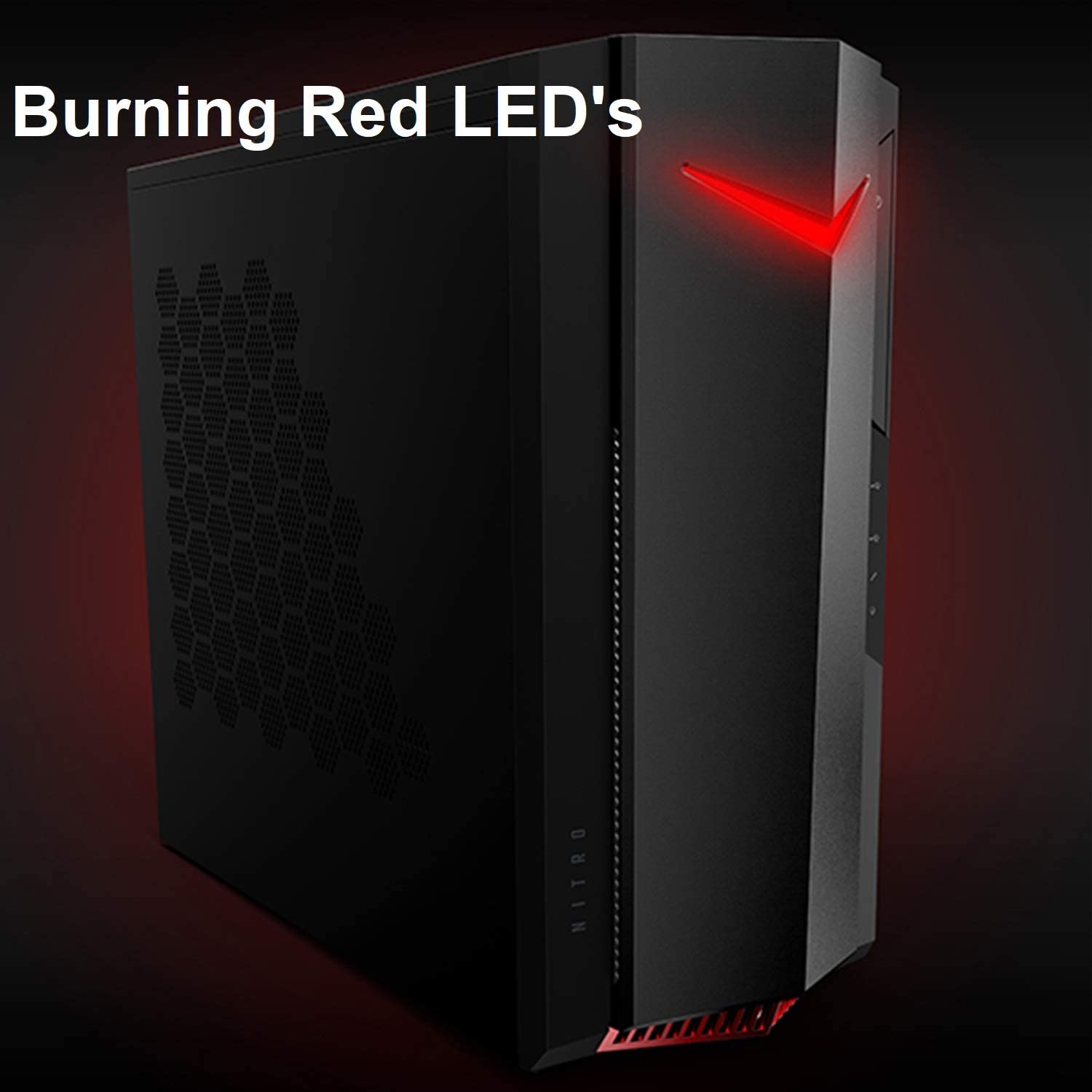 Thanks to the GTX 1650, serious gamers can expect 60fps at 1080p medium to high quality in most games. It will however struggle on more demanding games which means you might have to dial a few effects down to keep things running smoothly. In short, expect lower than 60fps on demanding AAA gaming titles. For users using 144Hz panels, the Nitro 50 can easily handle eSports titles smoothly so don’t be shy.

For most users, 8GB RAM is enough memory to power through general productivity. The HP Pavilion TP01-2032 desktop is a basic productivity desktop but it flaunts 4GB RAM which is ample for daily tasks.

In the gaming scene, 8GB is considered the bare minimum so for a midrange gaming desktop, 8GB is a solid start. A PC generally uses about 2.7GB at idle with programs that use Windows. If you’re a gamer, most smaller gaming titles will run with 8GB. I’m talking about games such as F1 2018, Apex Legends, Battlefield V, PUBG, The Division 2, and Shadow of the Tomb Raider.

So let’s cut to the chase. If you’re planning on light gaming, say something on a Full HD (1080p, or 1920 by 1080 pixel) monitor, this rig is ideal. Anything beyond that, for instance, 4K, the Acer Nitro 50 is not built for and would not handle. The GTX 1650 is however reliable for a 60-frame-per-second (fps) performer at 1080p, which is what we recommend it for.
On other fronts, it fairs well on can handle day-to-day use. The Acer Nitro 50 also gets some decent connectivity, memory and storage but most of all we love that it’s portable and budget-priced – it is affordable for gamers on a budget.

Is there another alternative

For around the same price, there are a few other choices available. The CyberpowerPC Gamer GXiVR8060A11 is a perfect replacement for budget gamers. It comes with just about the same features as our review unit but does better on the graphics card (Ray Tracing GPU). The Nvidia RTX 2060 has enough gaming grunt 1080p and 1440p displays and it can play eSport games at speeds required for 144Hz and 240Hz output.
It spots an intel Core i5-11400F, 8GB RAM, 500GB SSD storage and a GeForce RTX 2060 (6GB) GPU. This unit receives our Editor’s Choice for midrange gaming desktops.

Is MSI A Good Brand?

Is Sling TV The Best IPTV For Firestick And Android TVs?

Windows 10 Home Vs. Pro For Gaming

5 Web Scraping Challenges And How To Overcome Them

Best
Recommended
Buying Guides
Quicklinks
Get To Know Us